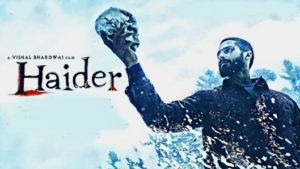 “My angel!” A woman’s voice is heard outside a hut in the snow in Kashmir in 1995, a landscape devoid of colors other than mostly black, white, and deep blue. Ghazala’s son, Haider, a lone fighter, is hiding inside the severely damaged hut. Having sustained gun-shot wounds, he is surrounded by the soldiers led by his uncle Khurram who plans to kill him with a shoulder-launch rocket, but Ghazala, caught in between her lover and her son who is intent on avenging his father’s death, convinces Khurram to give her one last chance to persuade Haider to give up his revenge plan and surrender. Soft spoken, Ghazala may not appear to be a particularly strong woman at first glance, but she is taking on the active role of a liaison, negotiator, and now a game changer.